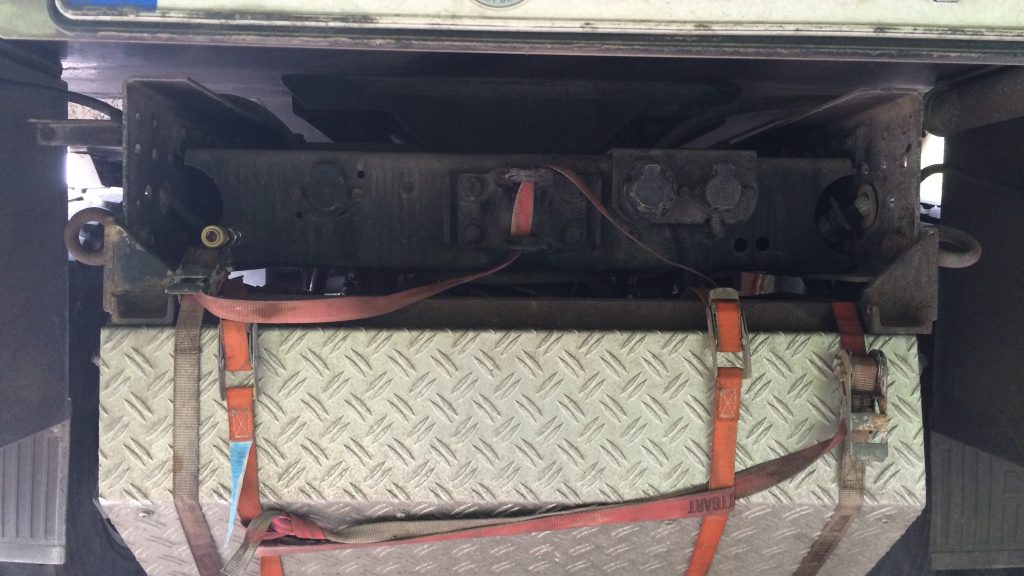 In Greece in 2009, the combined waste water/fecal tank was almost lost due to improper UNICAT design including underdesign of bolts, for more information on the trip see: www.truck-the-world.com

The tank was removed and sanified including sensors. A new construction was designed fixing the tank directly to the frame using 4 lashes welded to the tank, counterparts screwed to frame.

It was found that on narrow roads and tracks, sand ladders were sticking out too far and hit several times. The holding construction was bent.

A new construction was designed placing ladders laterally as tank protection underneath coffers as seen on Rally Dakar trucks. Ladders are fixed with belts, a simple light weight construction coming with simple handling.

A new coffer was designed to close the space between right side tanks and rear wheel as underride protection.

Originally, the truck came with 380V in 5 phases since it was intended to install welding equipment. This was never done and the generator was rather removed saving weight but keeping the original cables, plugs and fuses.

Only in 2012 the 380V-network was completely removed. Phase separation was made and additional fuses were installed for the converter and for both 220V phases.

Also, after finding 50 litres of fresh water in the cabin flooding the battery compartment shown above, it was found that the original flexible, metal-coated pipes were simply padded with tape to walls or bottom. Tape aging led to pipes hanging around or wandering over the ground. Such, friction destroyed metal coating piece by piece under off-road conditions. Broken filaments simply bored the pipes they ought to protect.

All pipes were replaced by simple food safe plastic pipes. This was quite time comsuming since UNICAT design does not provide cable nor pipe channels or easy access.

Also the light weight roof rack was removed completely together with spare tire, tire crane, front and side beams and search light saving another 150 kg.

All measures taken were designed and mounted by the owner, manufacturing was made by professional companies. The maker UNICAT was not involved.

For more information about works, companies and cost contact the owner.